One of the lectures that I give at some of the rock and roll band camps that I have conducted, which consist of all pre teens and teens, is on the subject of hearing protection. As a young player, the practice or band rehearsal area is usually a close quartered situation such as a bedroom or garage with lots of hard surfaces for sound to bounce around in and actually be amplified in. Just banging on an open drum set in this environment is bad enough. Add in a huge bass and guitar amplifier or two and it becomes excruciating. As a young player, you might have a very loud practice session which makes your ears ring for the rest of the day – but it’s cool because when you go to sleep and wake up the next day, the ringing is gone, right? Actually that’s not cool at all, because that ringing is your body warning you that you are doing damage to your hearing.

Without getting too technical for this discussion, sound is vibrations that travel through the air and strike the eardrum. At some point in the inner ear these vibrations, or impulses on their journey towards the brain, pass through a long spiral tube which has millions of microscopic hairs that are tickled as the vibrations or impulses pass over them. If the vibration or impulse is loud enough, it actually causes these hairs to lay flat instead of being in their normal state of standing straight up. This is what causes the ringing sound in the ears.

So you go to sleep and as the body rests, the hairs stand back up and the ringing is gone the next morning. Well that’s all fine and dandy for the short term, but if it goes on every weekend (or in my case six nights a week when I was working in a hotel band long ago) for fifteen or so years, what will happen is, one day (literally), you will wake up and the ringing will not have disappeared. It will be there for good.

I wish I were just a reporter on this, but unfortunately I am a victim. The way I just described it to you is exactly the way it happened to me. I hear it constantly and the only way I can sleep at night is to run a fan to cancel out the ringing in my ears. The condition is called tinnitus and there is no cure for it. The good news is that this condition is preventable. Unfortunately, it’s too late for me now, but it’s not too late for you—the beginning to intermediate player or anyone else that doesn’t have it yet.

If only I would have done this one little thing through all of those years of guitar amps constantly in my ear (it was mainly guitar, not drums), my ears would not be ringing today.

The problem is that, with the smaller to mid-sized rooms that we as players must perform in, the only place to fit the guitar amps is back by the drummer right at his or her ear level. Now Mr. My-Amp-Only-Sounds-Good-When-It’s-On-29-and-a-Half-Spinal-Tap, gets to stand a good fifteen to twenty feet away from his amp. Meanwhile Mr. Drummer gets to have his clock cleaned by guitar volume because there is nowhere else for the amp to be placed.

Now back to that one little thing that I could have done to remedy to this situation—wear earplugs!  Earplugs are cheap and can be found at any drug store and just about any kind will do.

Another symptom of tinnitus is that it doesn’t take as much volume to make the ringing even louder than it already is. So for me anything other than a very quiet jazz gig (rock, country, or blues) makes earplugs mandatory.

Here is a good rule of thumb: if you are performing on stage (or in your garage or bedroom) and you have to yell in order for your band mate to hear what you are saying, you should definitely be wearing earplugs.

Let’s face it, rock and roll is loud and it was meant to be played loud (to an extent). To the occasional live concertgoer or music listener this is not a huge threat. But to the musician who is exposed to this night after night, it becomes an occupational hazard that must be addressed just as it would be with any other loud occupation such as mill worker, steel worker, airport worker or what have you.

Earplugs are the cheapest and most convenient form of ear protection and are used by amateurs and professionals alike. These days on the professional level there are more options combining monitoring and hearing protection. One product, called Ultimate Ears, is quite popular with sound engineers and performers for the past decade and a half or so. First a mold is made of both ears by an audiologist and sent to the manufacturer who then makes an over-sized custom fit earplug with drivers (small speakers) in them for each ear. The plugs are then run through a monitoring system so that when you wear the plugs while performing, the ambient or outside noise is blocked out while you hear everything at a greatly reduced volume through the tiny speakers in the plugs, similar to a Walkman. You may have seen performers on TV wearing these. They are tan in color and cover the entire ear canal with a wire that is wrapped around the back of the ear.

The manufacturer Shure also makes several versions of this. The last time I checked, which was five or six years ago, the Ultimate Ears listed for around $700 while the Shure system listed for a few hundred dollars less. That does not include the $75 trip to the audiologist to have the molds made.

One ingenious company, GK-Music, put the same isolation concept into a different apparatus. The apparatus, named UltraPhones, consists of aircraft carrier safety headphones fitted with Sony drivers. Since these cut out just about all outside sound (30 db cut), music coming through these can be played at an extremely soft volume while being played at an extremely loud volume out side of the ear cup. These are what I used for five years on my own classic rock band, Crop Circle and they performed beautifully. It was as if I were sitting at home, listening to the band through a pair of high quality headphones. It was important that I got a fairly transparent sound through these because I not only wore the hat of drummer/front man (at times) but I also wore the hat of soundman. The board was set up next to me and I mixed the sound of the band from the stage through these phones. All of the instruments went direct into the PA with no guitar or keyboard amps and no wedge voice monitors. The only live instrument on stage were the drums, all miked and behind a plexiglass sound reflector (ClearSonic manufacturer). All of the other players used in ear monitoring (the Shure system) and the PA was run in stereo out in front.

You know, God only gives you one set of ears. And, to me, hearing is hands down the single most precious sense. Without it, I would not be able to experience music, or perform it, or teach it and pass it on. To the young player that will be exposed to loud music night after night—do every thing in your power to protect your gift now, so that there will be a later.

When teaching a beginning drum student basic skills, I like for the student to use a medium weight stick such as any pair of 5B 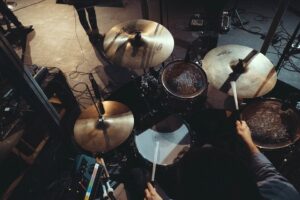 Drum Articles
How to Buy a Drumset

What to Look For There are a few things that you should keep in mind when buying a drumset. If you stay with the major 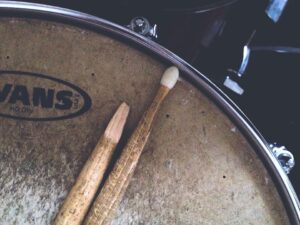 Here is a list of some of my favorite drummers while growing up, in no particular order, and why they had an impact on me in some